You are here: Home / Random / Cox DVR Problems… Are they really, “Your Friend In The Digital Age?”

Note: They did provide a solution to this issue, it turns out that the older “Scientific America Explorer”, and “Cisco HD” boxes use the same software which is known to Cox to be a problem. The only real solution so far has been to upgrade to the new “Whole Home DVR” receiver which uses a completely different software package.

You would think that a company like Cox.net that prides themselves on being “Your Friend in the Digital Age” would have their act together when resolving issues.

I have been a customer of Cox since moving to Arizona, and have not had any issues with my service in my house since moving in August 2007.

I started having problems with the DVR service in June of 2011. The DVR would record something, but when trying to play back the item I would just get a message screen stating “This program is unavailable”.

After contacting support about the issue they sent out one of their contractors who checked all the signal strengths, connections, etc. and finally swapped out the receiver box since there was no other issue to be found. This refurbished box lasted about 30 minutes before it started making clicking noises, who actually refurbished these things?

I called and they sent him back to replace that box with another refurbished unit.

A month later the same issue came back.

Swap out the box again.

I started to move this discussion online with a Tweet:

They did get back to me within 3 hours, Except Mick who was/is in charge of getting back to people didn’t know that you can’t DM (direct message) someone unless they are following you. Further investigation revealed that I was not the only person he said this to, it was a recurring issue with Mick responding to people.

Mick gets back to me to tell me to email the AZ Cox help desk with my issue. The next day starts my relationship with Brett E. a “Cox Customer Care Team Mentor”. NOTE: Most of Brett and my conversations are documented in email, even though part of our conversations were through phone.

As an employee Brett seems like he is intelligent and really wants to have happy customers, I have nothing bad to say about Brett, what I don’t know since I am on the other side is whether Brett is or can get anything done, let me explain why.

We started out by checking the signals and resetting my system clean. I don’t know if you have ever done this, but it takes everything, including your:

and completely erases them. So you have to go through and completely reprogram your system, which can take abut 45 – 60 minutes on a good day.

After doing this we have to wait a week to see if the problem comes back.

It did, wipe it again and hope for the best.

Problem came back, do it again.

As you can imagine, this is not the best scenario and reprogramming the box is not an enjoyable experience. I mentioned multiple times that the programming should be exportable or backed up somewhere, after all there is a USB port on the front, a SATA connection on the back, and I’m sure someone can figure out a way to upload this information to a server somewhere so that boxes can just be swapped out without annoying the customer. In total Brett reset my system 4 times, and I had 3 new receiver to program.

An actual Cox tech came over to swap the box out, and just gave me a brand new box insisting that the hard drives go bad and this is the only way to fix the situation.

Later in the month Brett assured me that they had a team working on the issue. I’m not sure what team, who they work for, or what they were actually doing, but the problem was never resolved.

Brett sends me an email that he would contact me a week later to see if there are any issues. There were, but aside from resetting the box there was nothing he could do.

Decided to get HBO, which also has an HBO HD… This requires an HD receiver for another $10 a month. My thoughts are that the better HD box would remove the problem all together, so I swapped out the old for the new.

I WAS WRONG! This didn’t do anything except add to the bill and frustration.

I informed Brett of the “same issue different box” which is now a slightly more expensive partially working DVR, and even more problems started popping up:

Brett informs me that it is in-fact a DVR software issue and they are going to be testing a fix the next week.

Steven,
Sorry for the delay in getting this information to you. It definitely is a software issue with the DVR’s, and I received some information from my interactive department. We have a fix that is going to be tested in our system in the next week. If all goes well with the testing we should be rolling out the update to all of our customers. I will be in contact with you to keep you posted on the progress and to let you know when we will be putting that update thru.

Brett informs me they are testing the repair and will keep me posted.

After not hearing from Brett I emailed him:

Brett this has been going on since October 28th.
The DVR & getting stuck on channels problems, that you have admitted are known problems, still continue, you either have to provide a solution or stop charging me and refund the past few months until this is resolved.

After speaking with Brett he provided me a credit for the past few months of DVR service, however he was also attempting to provide me with a discount going forward to make up for the ill functioning DVR.

However, this credit has never appeared and I am (as of April 13th) still being billed $18.50 for a partially (30% of the time) working DVR.

We currently have to reboot the receiver daily because it gets stuck with a black screen on a channel and you cannot physically change the channel.

This causes me to question a few things:

I’d love to hear your thoughts in the comments below if you have had any problems with your television provider, or a company who just strings you along thinking that you can’t voice your opinion to a larger audience. Please share to help get situations like this resolved. 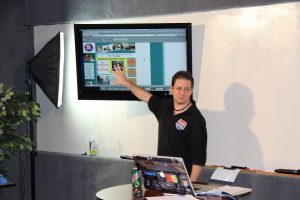